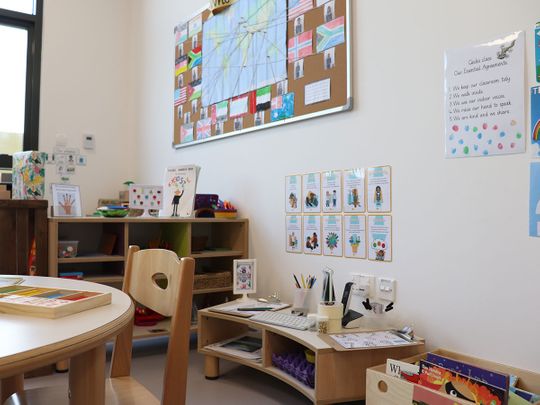 The new branch will also offer the International Baccalureate curriculum, just like the school’s first branch in Al Raha Gardens.

At present, the Khalifa City campus caters to children in the Early Years or kindergarten level, and to those in the Lower Primary level, the school announced in a statement. By September 2021, it will expand to welcome students up to Grade 8, and will eventually be able to accommodate 3,000 students from kindergarten to Grade 12.

The school’s Early Years Centre, which emphasises child-initiated learning is also open to allow young learners to learn in a way that complements their natural stages of physical development.

“Learning outside is so important for our children, it allows them to learn in a totally different way. The space outside is bigger, which in turn allows their thinking and learning to be bigger. It has been amazing to see the den making, problem solving and collaboration that has been happening in our new outdoor spaces,” said Anna Lacey, deputy head of Early Years at the school’s Khalifa City Campus.

The Raha IB philosophy encourages Early Years students to learn through investigation, exploration and play. Each classroom is planned to promote learning in using open-ended resources that allow children to take learning in any direction. Math, science and language development can be seen through role-play, construction and sensory zones, enhancing the learner experience to be spontaneous and exciting.

“The staff has gone above and beyond to ensure our young learners feel safe and settled in their new environment, [despite] the typical new campus challenges, [and the need] to uncompromisingly adhere to COVID-19 precautionary protocols,” said Iain Colledge, school principal.

Raha International School’s first branch in Abu Dhabi, a member of the Taaleem family of schools, first opened its doors in 2006. It currently enrolls 2,000 students from kindergarten to Grade 12.