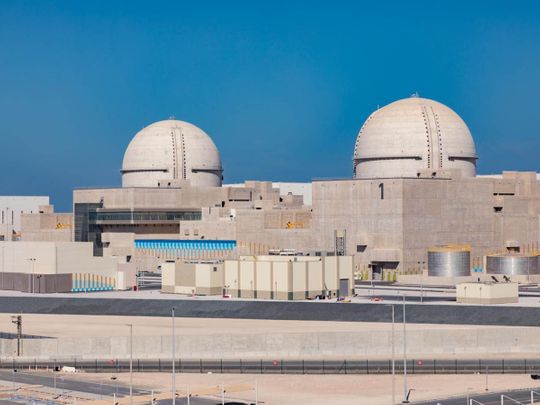 Abu Dhabi: The UAE’s nuclear regulator, the Federal Authority for Nuclear Regulation (FANR), is now reviewing the operating licence application for Unit 2 of the country’s first nuclear power plant, a senior official announced in the capital on Monday.

The licence will be issued when the operator, Nawah Energy Company, declares its readiness, and can meet all regulatory requirements, said Christer Viktorsson, director general at the FANR.

“2020 was a challenging year due to the COVID-19 pandemic, yet the UAE Nuclear Energy Programme has witnessed major milestones this year. Unit 1 reached 100 per cent power and began delivering electricity to the national grid, and we are reviewing the operating licence application for Unit 2,” Viktorsson said during a virtual press conference to review the 2020 achievements of the nuclear sector.

“We managed to cope with the unforeseen circumstance and maintain our regulatory functions, while also implementing a range of [COVID-19 precautionary] measures. [These included] mandating employees to work remotely, a reduced number of resident inspectors at Barakah Nuclear Power Plant, and the activation of remote inspections,” he added.

The Emirates Nuclear Energy Corporation (ENEC), the owner of the Barakah Nuclear Power Plant in Abu Dhabi emirate’s Al Dhafra region, last week announced that Unit 1 is now generating 1,400 megawatts of electricity from a single generator connected to the UAE grid. According to ENEC’s operating and maintenance subsidiary, Nawah, this makes the plant the largest single source of electricity in the UAE.

Work is currently ongoing to begin Unit 2 operations, as well as to complete the construction of Units 3 and 4. When all four units are operations, the plant will generate up to 25 per cent of the UAE’s electricity. “During Unit 1 review, the FANR conducted 185 inspections, and this year, the regulator has conducted 20 inspections covering Unit 2’s safety, security and safeguards. The regulator has also certified 23 reactor operators to join 58 others to manage Unit 1 and 2’s control rooms,” Viktorsson said.

Other than the milestones at Barakah, the country’s nuclear sector also witnessed other major leaps this year. The FANR launched a Nuclear Non-Proliferation Centre in August to train and provide support regarding nuclear safeguards, export controls and non-proliferation.

The authority also conducted 48 inspections for licensee storage facilities, and certified the first batch of 14 temporary qualified experts in radiation protection who can work in advisory roles within institutions and private companies working with ionising radiation.

A new version of the Radiological Environmental Monitoring Programme report will soon be launched, with details on radiation levels in the UAE environment. This year, the authority carried out 240 inspections of medical and non-medical facilities, while also issuing 263 new licensed and 1,046 import/export radiation permits. In addition, a total of 540 calibration certificates were issued to to customers from medical, industrial and nuclear sectors in the UAE.

In 2021, the UAE is set to host a major international exercise that will test its emergency preparedness and response system. The exercise will be the largest and most complex one organised by the International Atomic Energy Agency.

The FANR, which has 245 staff, of which 67 per cent are Emiratis, also launched a Youth Council in November to support future Emirati nuclear experts.