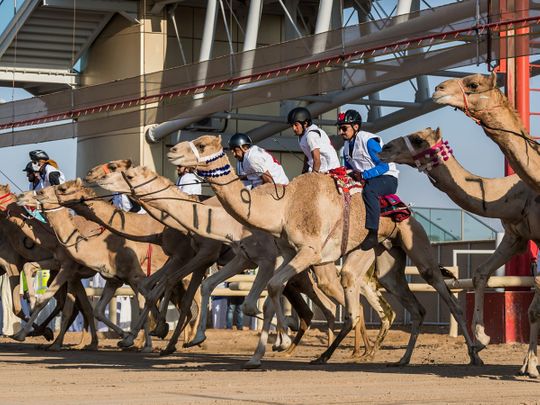 Dubai: A couple of preliminary camel races will be held on Friday (November 27), ahead of the sixth edition of the National Day Camel Marathon, the Hamdan Bin Mohammed Heritage Center (HHC) has announced.

Another trial race will take place on Friday at Dubai’s Al Marmoom racetrack in preparation for the 2nd Camel Trek Marathon for UAE expats.

The preliminary race for National Day Camel Marathon, which is exclusive to Emiratis, will have two categories — one for participants 29 years and below and another category for those above the age of 30. The Camel Trek Marathon, meanwhile, is open to expats in the UAE but participation at the event is open only to those who have prior training and participated in any of the previous annual camel treks organised by HHC.

Last year, more than Dh350,000 were awarded to all the winners in the camel marathon.

“Camel racing is one of the most enduring centuries-old traditional sports in the UAE. The National Day Camel Marathon is aimed at safeguarding our intangible cultural heritage and encouraging Emiratis to participate in traditional sports in an atmosphere that exudes a sense of national pride and community spirit,” said Souad Ibrahim Darwish, Director of Championships at HHC.

She added: “Owing to the success in last season’s preparatory camel races and the demand by Emirati youth, we have introduced a new match covering another age group (below 29 years). This will create equal opportunities to empower and prompt riders for the upcoming National Day Camel Marathon with a distance of 11km, which will be held in conjunction with the Arabian Camel Festival under the patronage of Sheikh Hamdan Bin Mohammed bin Rashid Al Maktoum, Crown Prince of Dubai.”

Abdullah Hamdan Bin Dalmook, CEO of HHC, noted the camel race was organised in the “framework of spreading tolerance among different cultures of the world”.

He said: “The UAE’s founding father Shaikh Zayed Bin Sultan Al Nahyan established a similar race in the early 1990s, which opened the door of participation of a group of foreigners who conducted the race in the country. After about 30 years, the Crown Prince of Dubai has revived a similar competition that is bound to further promote the UAE’s rich cultural heritage, not only among the Emiratis but expatriates and tourists as well.”