Dubai: Sunday night’s spectacle of ‘shooting stars’from the clear skies of the UAE was an unforgettable experience for those who had the privilege of watching them, with many describing it as “surreal” and the best thing that could have ever happened amid the pandemic.

“If you ask me what is that one good thing that happened in 2020, I would say it was the Gemind meteor showers. It was an out-of-the-world experience and I counted around 50 meteor shoots,” said S. Siddique, a Dubai-based resident who was among the lucky few to have made the trip to Wadi Showka in Ras Al Khaimah to watch the showers under the guidance of the Dubai Astronomy Group (DAG) and Ras Al Khaimah tourism authorities.

No doubt, the Gemind meteor showers fall every December, and it’s always a treat to watch them, but for this time round was extra special, with pandemic-weary viewers getting a much-needed break and catching up to 120 meteors a minute.

“Shooting stars, they say, make wishes come true, and I just pray COVID-19 will now be behind us. I am sure this is something everyone will wish for,” said Siddique.

Little Ahmed Dhiyah, a Grade 3 student, couldn’t hide his excitement after counting 14 meteors. “When I was on my way up here in the car, I was a little bit nervous as I could not see any stars in the sky. But now, there is so much to see,” he gushed.

With no “moonlight interference”, the night allowed viewers to get their heart’s fill, well into the wee hours of Monday.

It’s so amazing here, the location is unique, the skies are beautiful and the meteors are falling.

DAG’s CEO Hasan Al Hariri said, “It’s so amazing here, the location is unique, the skies are beautiful and the meteors are falling,” he said, hoping that the experience of watching the shooting stars would make more people inclined towards astronomy.

The 200-odd people who had gathered in the area were in no hurry to leave as they hoped to get more of the celestial treat.

S. Paul, a tourist impressed by the “incredible arrangements” to watch the showers, said, “It’s my first experience of watching a meteor shower and I am so excited. I cannot wait to watch the climax of the showers. It’s just fantastic.”

Asim, another first-timer when it came to watching meteor showers, said, “I have spotted eight meteors so far. It’s been a wonderful experience.”

Pictures: Meteor showers over the years 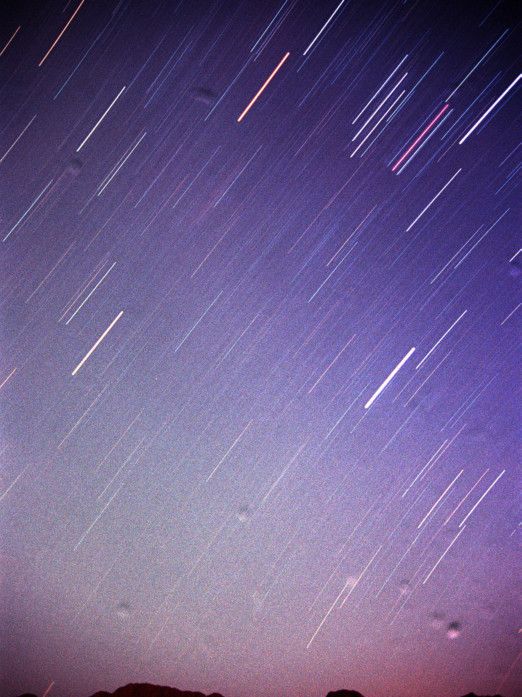 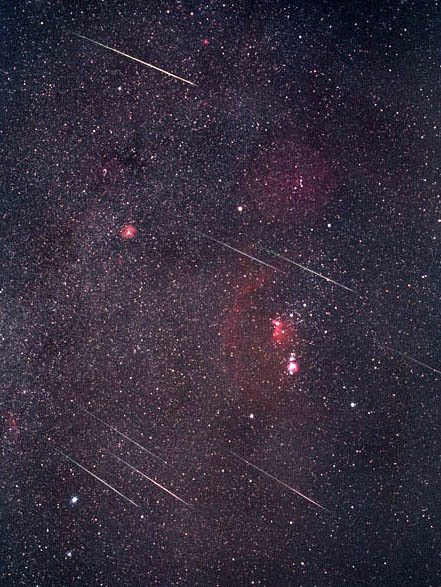 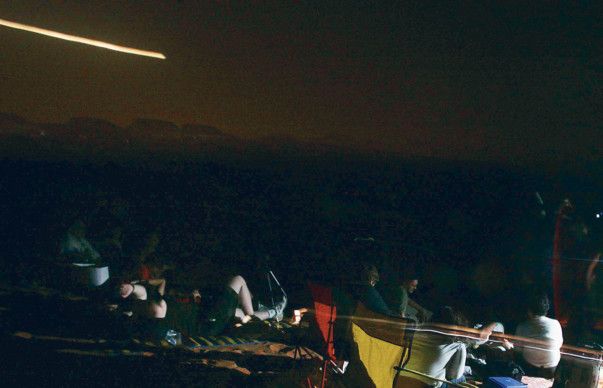 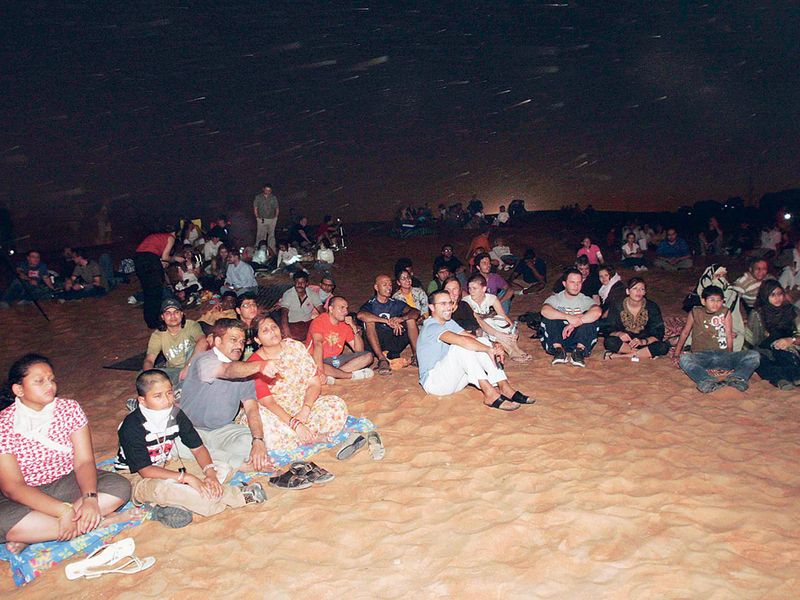 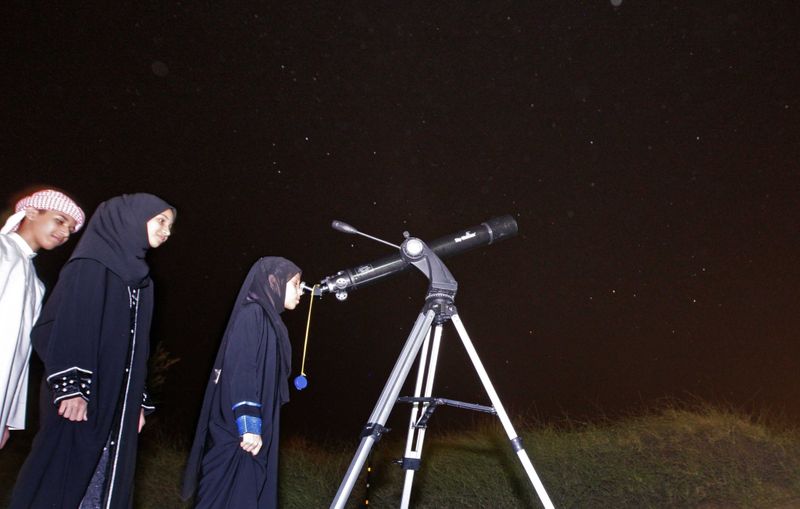 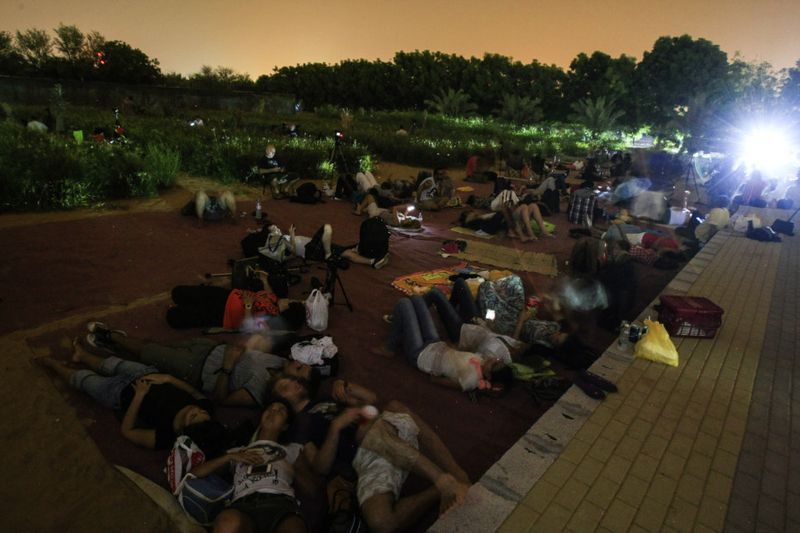 2013: At least 30 Perseid meteors burst in the night sky as seen from the Zubair Camp in Sharjah.
Image Credit: Ahmed Ramzan/Gulf News archives 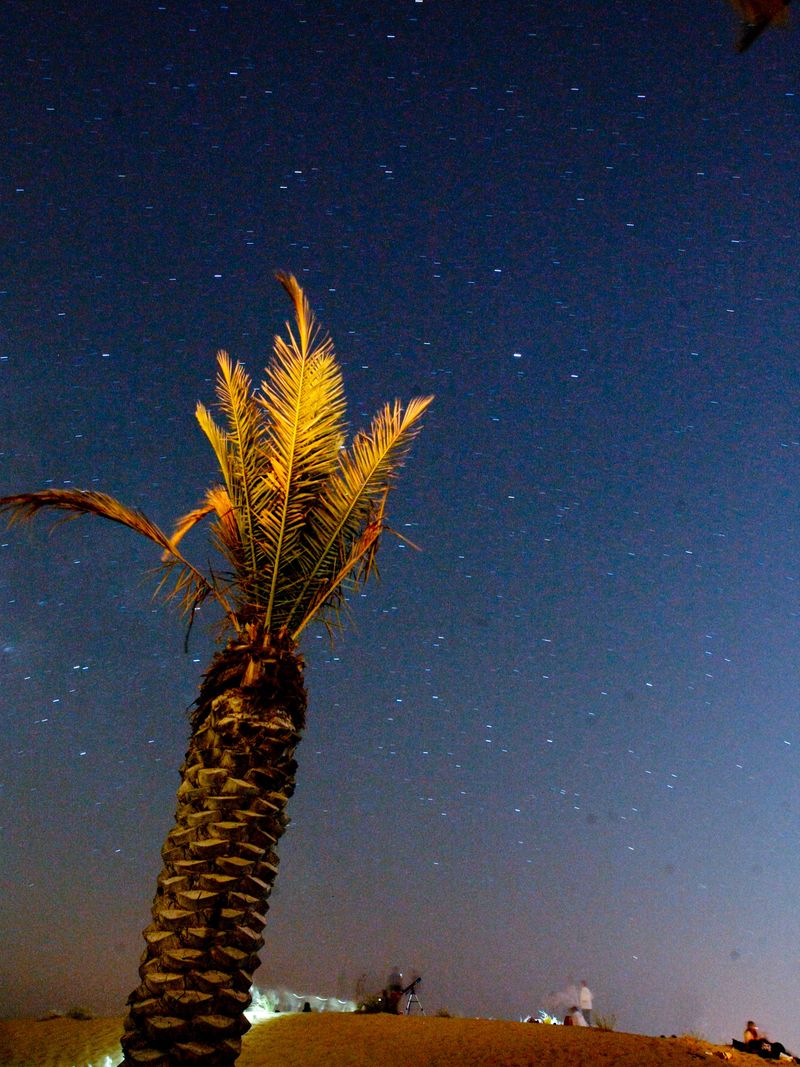 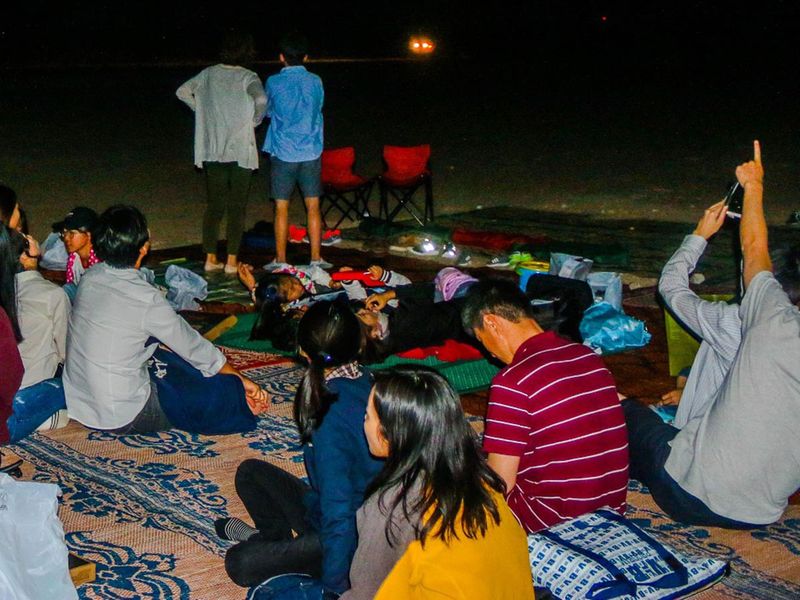 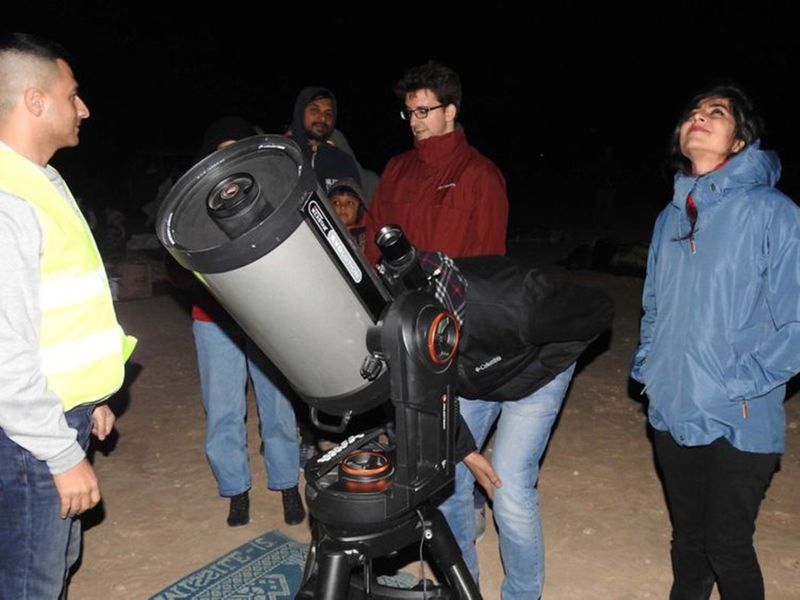 The big deal about Sunday’s showers

Besides the sheer beauty of the shooting stars, the science behind them is also fascinating. Meteor showers are usually named after a star or constellation that is close to where the meteors appear in the sky. According to the DAG, the name of last night’s showers comes from the constellation Gemini as the meteors seem to emerge from this constellation in the sky.

Unlike most other meteor showers, the Geminids are not associated with a comet but with an asteroid: the 3200 Phaethon. The asteroid takes about 1.4 years to orbit the Sun.

“Geminid’s parent – 3200 Phaethon – is a “rock comet” Every year, in December, our planet Earth crosses the orbital path of an object called 3200 Phaethon, a mysterious body that is sometimes referred to as a rock comet. The debris shed by 3200 Phaethon crashes into Earth’s upper atmosphere at some 80,000 miles (130,000 km) per hour, to vaporise as colorful Geminid meteors,” said Al Hariri.

The Geminid meteor shower is nearly 200 years old, according to known records — the first recorded observation was in 1833 from a riverboat on the Mississippi River — and is still going strong. In fact, it’s growing stronger. That’s because Jupiter’s gravity has tugged the stream of particles from the shower’s source ― the asteroid 3200 Phaethon closer to Earth over the centuries. 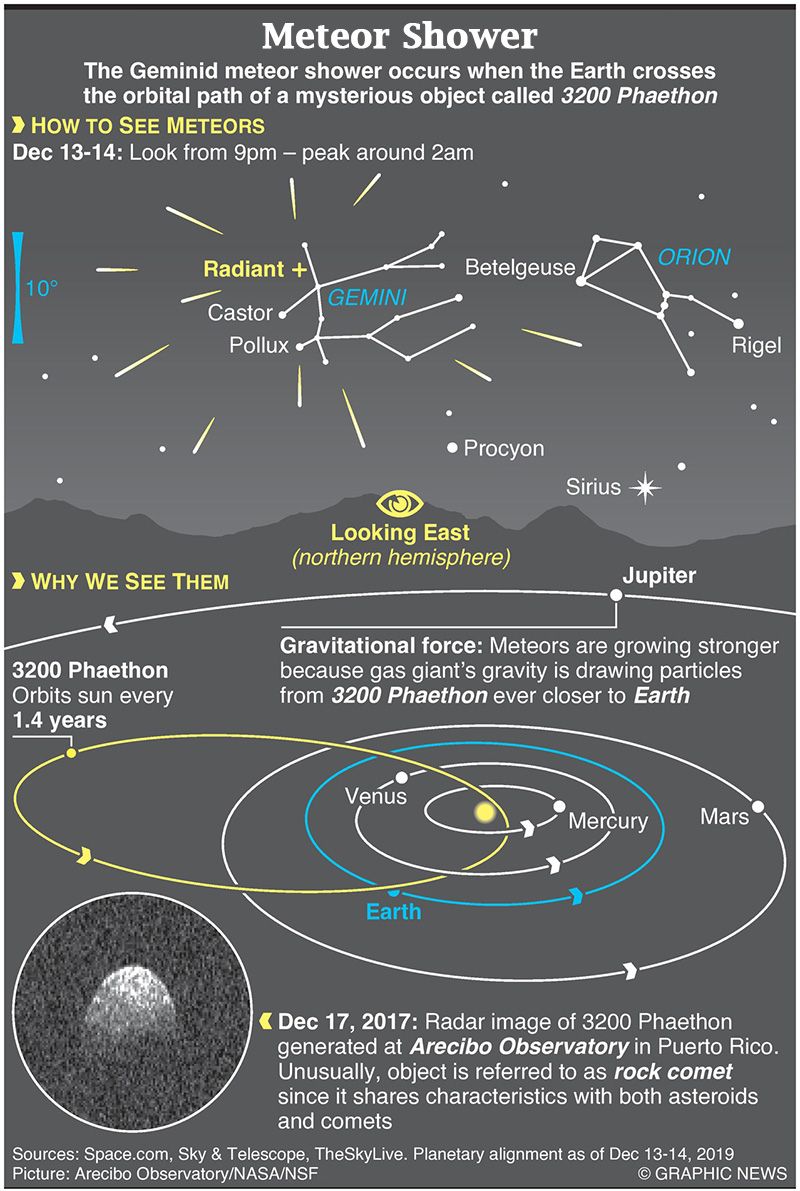 So how are meteor showers best watched?

Al Harriri said meteor showers must be seen by the naked eye. What you need is a dark place where there are no lights Every meteor shower also has a map and one can easily download these maps on available apps to determine the distance from which the shower falls. Once that is established, you lie down on the ground, and train your eyes for about 20 minutes in the direction of the radiant to enjoy the spectacle.

Any open area without the interference of light makes a for a good viewing point. But popular places to watch meteor showers in the UAE include Al Qudra Lake, Dubai, Liwa desert in Abu Dhabi, Mleiha in Sharjah and Wadi Showka in Ras Al Khaimah.

Does guided viewing with an organisation help?

The beauty of meteor showers is there for everyone to see, but guided viewing goes a long way in order to understand the science behind the phenomenon. In the UAE, UAE Astronomy Group, Dubai Astronomy Group and UAE Mleiha Archaelogical Centre, Sharjah organise special events to watch meteor showers.

Any precautions to take?

While there is little or no risk in the viewing of shooting stars, the fact that the spectacle occurs in the night must be taken into consideration. Dressing appropriately would become necessary to stay protected from the cold in open spaces especially in the winter months. Viewing in groups is advisable from a safety point of view too.

According to Al Hariri, the next major meteor shower to be visible in the UAE are the “plentiful Perseids” in August. Orginating in the constellation Perseus, the showers which begin in July 14 will go on till August 24. Peaking during mid-August, they are considered one the best meteor shower of the year, as they leave long “wakes” of light and colour in their trail. The Perseids shower will allow viewers to see 50-100 meteors per hour in relatively warmer climes. 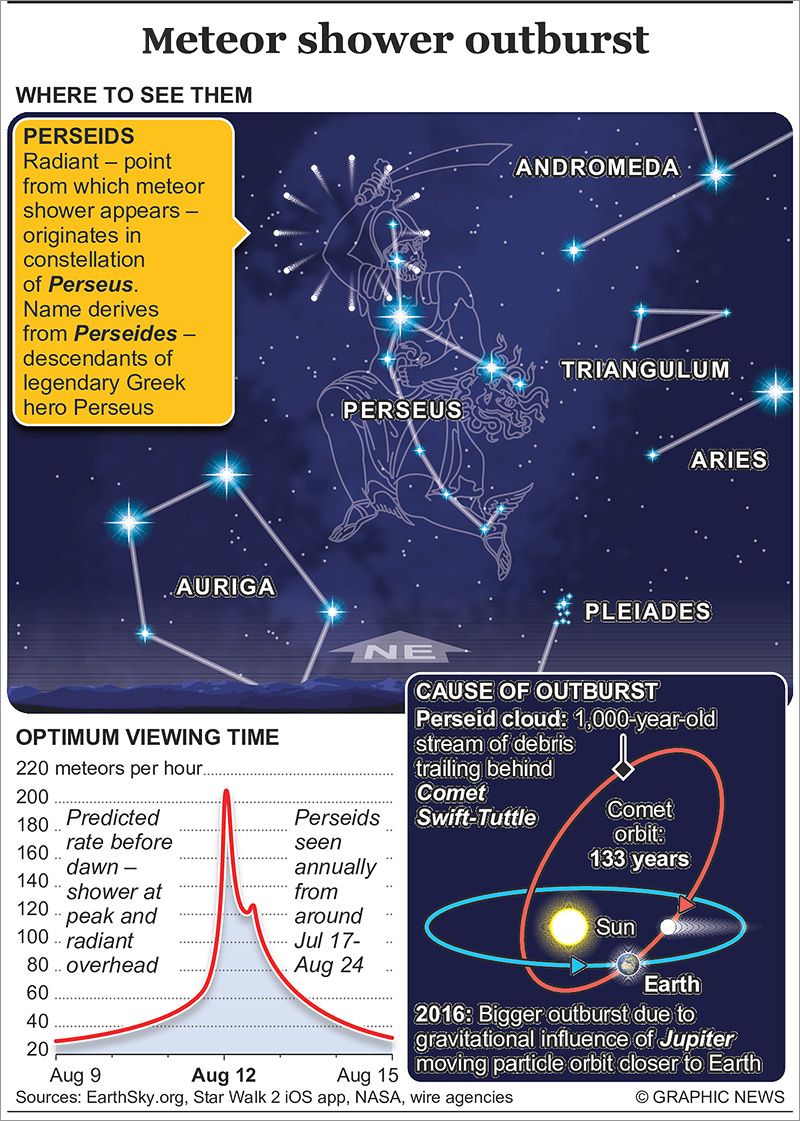 All you need to know about meteor shower

What is a meteor shower?

Meteor shower occurs when meteoroids enter Earth’s atmosphere. Meteor showers generally happen when the Earth passes through a region having a greater than usual concentration of interplanetary debris, such as particles left by a disintegrating comet, at certain points in its orbit. Most meteor showers are believed to be associated with an active or defunct comet. It generally happens at the same place in the sky and the same time of the year. Any other solar system body with a reasonably transparent atmosphere can also have meteor showers. Although the meteors enter the Earth’s atmosphere on parallel trajectories, perspective makes it appear as if they originate from the same point in the sky, known as the radiant. 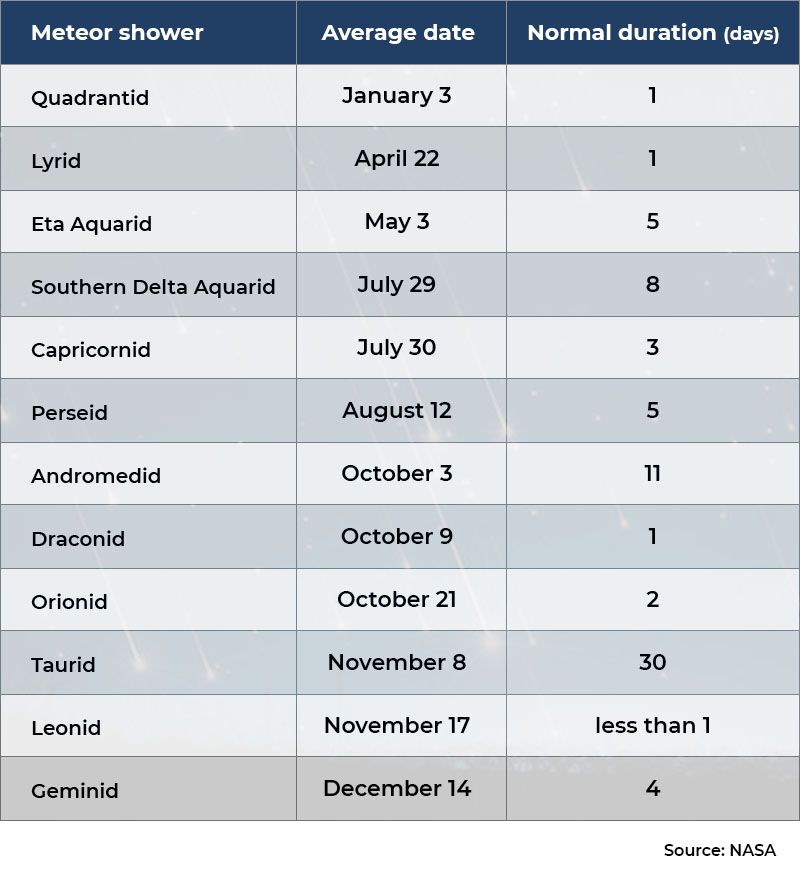 Meteoroids or ‘space rocks’ are objects in space with varying sizes. It can be as small as dust grains or big as a small asteroid.

The fireballs or ‘shooting stars’ that you see in the sky when meteoroids enter the Earth’s surface are called meteors.

What is a meteorite?

When a meteoroid enters the Earth’s atmosphere, survives the journey and ends up on the surface of the Earth, it is called a meteorite. 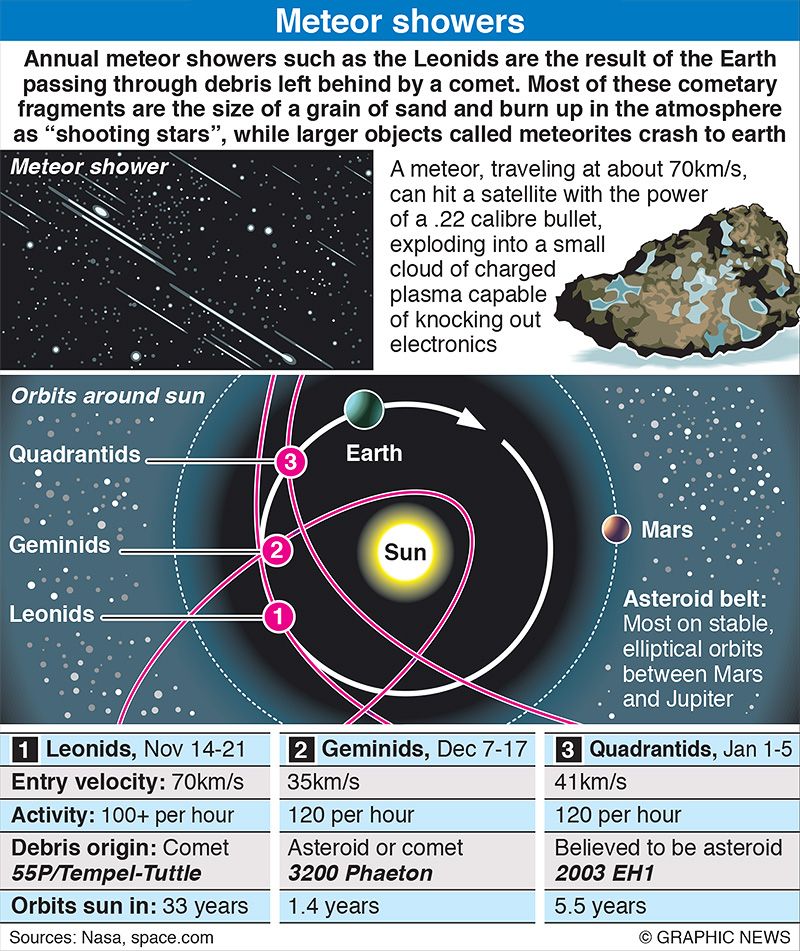 What is an asteroid?

An asteroid is a small chunk of rocky minerals that orbits the Sun.

Meteoroids are almost always small enough to burn up in the atmosphere and the chances of them striking Earth’s surfaces are grim.

Comet, a spectacular object in the sky, is a small body orbiting the Sun. Most of it is made of volatile ices. The ices sublimate (move from solid to gas phase) when the comet gets closer to the Sun. Comets can appear at random from any direction and provide an ever-changing display for many months as they move in highly eccentric orbits around the Sun.