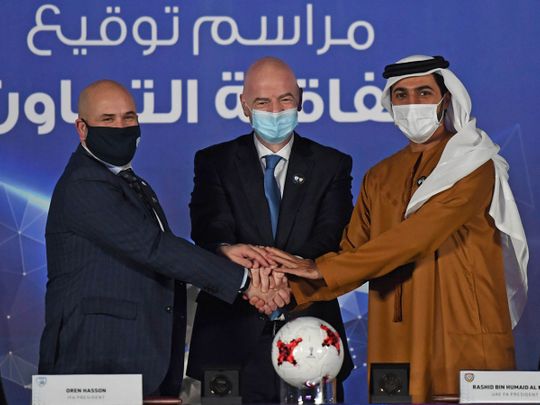 Dubai: The UAE and Israeli football associations on Monday signed a memorandum of understanding in a ceremony held at the FA’s headquarters in Dubai.

The ceremony began with a video showing the role played by the UAE in promoting peace among the countries of the world, the rapprochement and harmony that the game of football offers, and messages of love and peace from UAE national team player Ali Khaseif and the Israeli player Diaa Sabia.

The video addressed the methods of collaboration in the memorandum, considered one of its kind in the Middle East region, with regards to organising friendly matches for all national teams and clubs in the two countries, establishing joint workshops for technical and administrative members of the associations, and launching development initiatives that contribute to supporting the game in the two countries.

Sheikh Rashid expressed his happiness at signing the MoU, which he described as an important step to strengthen relations with Israel and various countries of the world. “I am optimistic about the success of this memorandum that serves the game in our two countries”.

Al Nuaimi extended his gratitude and appreciation to Infantino for his presence and support for this historic agreement, stressing that football is a language of peace, tolerance, and love. “This is what we want to show to the world, and we will work with the Israeli Association to make the agreement a success.”

Hasson said being in the UAE was a “dream two months ago and now it has turned into reality, and we are happy with this step. I am calling on everyone to visit Tel Aviv to build strong relations and let future generations know that football unites peoples and is a common language of peace.”

Infantino said the signing was an historic and iconic day, and one of the most important moments of football history. He said: “This agreement is close to my heart and I am proud of my presence. I also thank the UAE and Israeli Associations for this giant step”.

He also pointed out that he witnessed the peace agreement in the White House between the UAE and Israel and felt that a new history was being written. “Today we’re living the same history, and this is the first step in building a new relationship between two great countries in football.” He expressed his gratitude to the United Arab Emirates, which “gave our children that important step to build relationships of peace and true love for the future.”

The Spanish painter Jose produced a painting carrying the most famous landmarks in the country, the logo of the UAE and Israeli associations, a ball and a white pigeon representing the message of peace between the two countries.

Sheikh Rashid presented trophies and a shirt for the UAE national team to Infantino and Hasson.