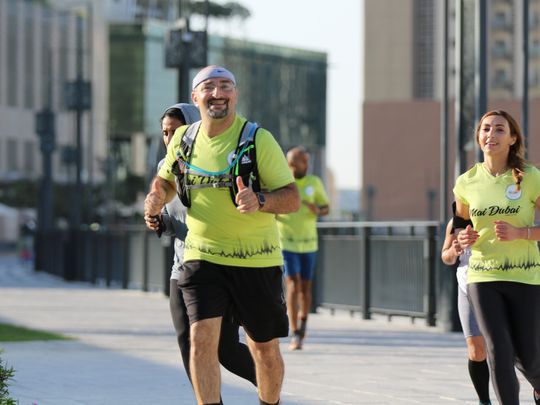 Dubai: A group of 30 runners each ran 30km in Dubai on Saturday, the last day of the month-long Dubai Fitness Challenge (DFC) 2020.

The group was diverse in terms of age and ability and had representations from various Dubai running communities. The initiative was planned by Dr Haitham Solh, a maths professor who has been living in Dubai for the past 12 years. He was inspired by DFC and has been participating in it for the past two editions. Dr Solh was able to reduce his weight from 120kg in 2017 to less than 100kg this year.

Dr Solh’s motivation behind taking on the challenge, which concluded its fourth edition this year, was two-fold: It was an opportunity to lose weight and increase fitness and also to be a role model for his two children. Runners gathered on the last day of the fitness challenge to take part in the 30-km run.
Image Credit: Supplied

Not having run more than 21km before, Dr Solh gathered runners from all the running groups he runs regularly with and led them on a long run at 4am on the last day of the ‘30×30’ fitness challenge to complete his first-ever 30km run. Dr Solh said: “I acquired the mindset of ‘nothing is impossible’ from living in Dubai and watching it break barriers and records on a regular basis. I wanted to challenge myself and prove that nothing is too difficult when you put your head to it. I am proud to have had the resilience and the support to complete the challenge. I am already looking forward to next year’s edition and to take on, and hopefully achieve, a bigger challenge in 2021.”

Launched in 2017 by Shaikh Hamdan Bin Mohammad Bin Rashid Al Maktoum, Crown Prince of Dubai and Chairman of The Executive Council, DFC is a 30-day annual initiative seeking to make Dubai the most active city in the world. Through a series of city-wide activations, for people of all abilities, DFC motivates residents to undertake 30 minutes of continuous exercise each day for 30 days.