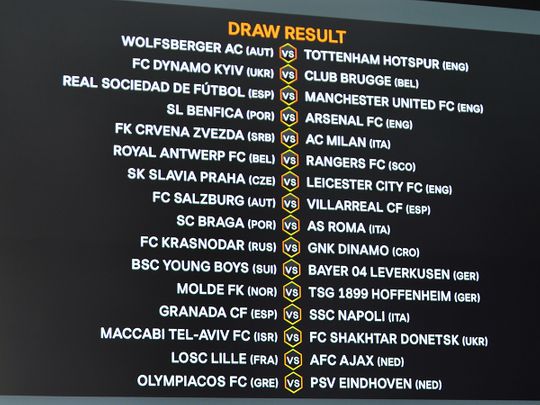 Nyon: Manchester United have been handed a tough draw in the Europa League last 32 knockout stage where they will face current Spanish league leaders Real Sociedad.

Ole Gunnar Solskjaer’s side finished third in their Champions League group and dropped into the second tier competition after last week’s defeat by RB Leipzig.

The clash with Sociedad will see United come up against former Manchester City favourite David Silva, now back in his homeland where he has inspired Sociedad to their excellent start to the domestic season.

Premier League strugglers Arsenal also have a tough draw against Portugal’s Benfica but their local rivals Tottenham Hotspur, who are top of the league, will be happier with their tie against Austrian club Wolfsberger.

The first legs will be played on February 18