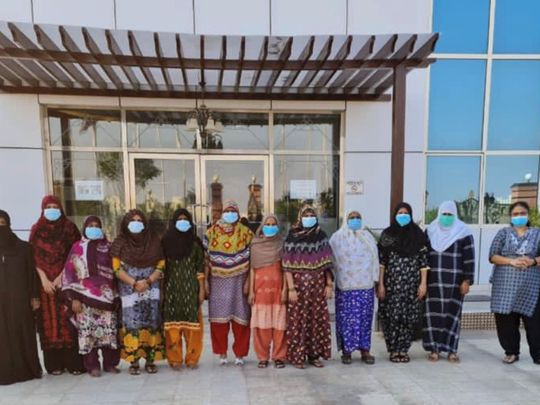 Ajman: Authorities and social workers have worked together to rescue 12 Indian women who were duped by recruitment agents, prompting the Indian mission in Dubai to reiterate its warning against job-seekers flying into the UAE on visit visas. The women, who were brought to the UAE on visit visas, had initially pleaded for help through their families and a social worker — Amjad Ullah Khan — in India. One of them also informed the police about their plight, following which they were rescued.

The Indian Consulate in Dubai said the mission was initially informed about five women who got trapped after being brought to work in the UAE.

“When we enquired, initially we got to know there were three more. We took action and made more enquiries through the Indian Association in Ajman. Then we found out that there were actually 12 women. We have provided them temporary accommodation and they are being taken care of,” Neeraj Agrawal, Consul for Press, Information and Culture told Gulf News.

Roop Sidhu, general secretary of the Indian Association in Ajman, said all the women, except one from Karnataka, hail from Hyderabadin south India. Aged between 21 and 46, they were given false hopes of jobs as housemaids. “They were not given proper jobs and they complained of being ill-treated,” said Sidhu.

What the maids say

A 21-year-old woman from Hyderabad, the youngest in the group, told Gulf News she had come in September and had been requesting the agent to send her back from the very next day after her arrival because she was being treated badly.

A 38-year-old woman hailing from Bengaluru said that she decided to complain against the agent who had locked up seven women. “My issue was about not legalising my papers. The agent told me to work in different houses for which I was not ready. Then he kept me with the other six women. I saw them being treated very badly. They were not given proper food. He was taking their money and abusing them. So I complained,” she said.

Sidhu said Ajman Police had already arrested one agent, while rescuing the seven women who were locked up in an apartment. “We also managed to rescue another group of five women from another accommodation managed by the same agent over the weekend,” said Sidhu.

On the advice of the consulate, he said he had given an undertaking on behalf of the association to provide food and accommodation to the women and also taken the seven women to issue their statement related to the case to the Public Prosecutor, along with volunteer Chaya Devi who handles such cases. On being pressured, the maids’ India-based agent booked tickets for two women and one managed to fly back home on Sunday, he said.

Thanking Ajman Police for their timely intervention, Agrawal said the women would be assisted with repatriation once they get clearance from the local authorities. The official reiterated that expats should not come to the UAE on visit visas to seek jobs. “People should only come through proper channels and should not fall prey to the middlemen,” the diplomat pointed out.

The employment of Indian housemaids is done through the online recruitment portal e-Migrate to avoid middlemen and also to ensure the welfare of job applicants.

The woman, who had complained against the agent, however, said the maids were not aware of the e-Migrate system.

“I have worked in Saudi Arabia and Oman earlier. I went on visit visas to take up jobs there. We usually approach the agents who get us visit visas. They give us the visas and tickets upon reaching the airport. That is what usually happens. We get residence visa and labour contract done after reaching the Gulf country. Maybe they are getting more commission for the way they brought us here. That is why they are not telling us about the e-Migrate system,” she said, highlighting the need for better awareness among women like her back in India about the government-authorised recruitment channel.