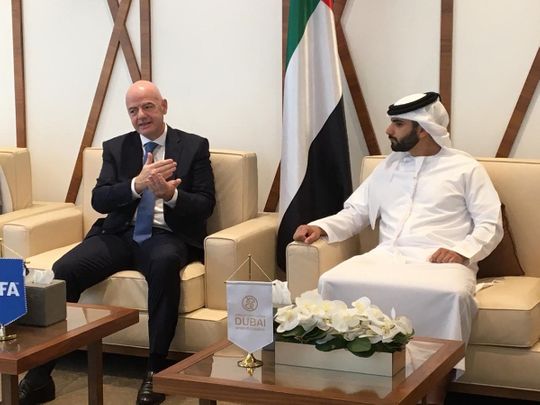 Dubai: Fifa President Gianni Infantino made a staunch pitch for football over other sports in a rather amusing incident during his two-day visit to the UAE on Monday.

Infantino, who turned 50 earlier this year, is in the country to oversee the official signing of an agreement between the football associations of the UAE and Israel that was scheduled to be held later on Monday.

Invited to have a look at the activities handled by the Dubai Sports Council (DSC) earlier during the day, Infantino sat chatting with Sheikh Mansoor Bin Mohammed Bin Rashid Al Maktoum, Chairman of DSC, while Mattar Al Tayer, Vice-Chairman of DSC and Saeed Hareb, General Secretary of DSC sat nearby listening to the interaction.

Sheikh Mansoor gave the Fifa president an overview of the council’s wide range of activities throughout the year. Infantino has been a regular in Dubai, especially at the DSC-organised Dubai International Sports Conference held at the end of December for the past decade and a half.

At one point, Sheikh Mansoor related to Infantino the involvement of residents at the fun ride held on Sheikh Zayed Road at the end of November. “We had more than 20,000 cycling on the streets and it was one of the most memorable event for me for a long time,” Sheikh Mansoor said.

Not one to be rude, Infantino continued listening to the musings of Al Tayer and Hareb about the cycle ride. And then with a wry smile the Fifa President expressed: “For me, it is about football. That’s the sport I love.”

At this, Al Tayer changed tack and told Infantino: “No wonder, I was finding you a bit uncomfortable in your seat while listening to our cycling stories.”

The football official nodded in appreciation as Al Tayer and Hareb went on to present Infantino with the specially crafted medal in honour of the frontline pandemic workers in the UAE. 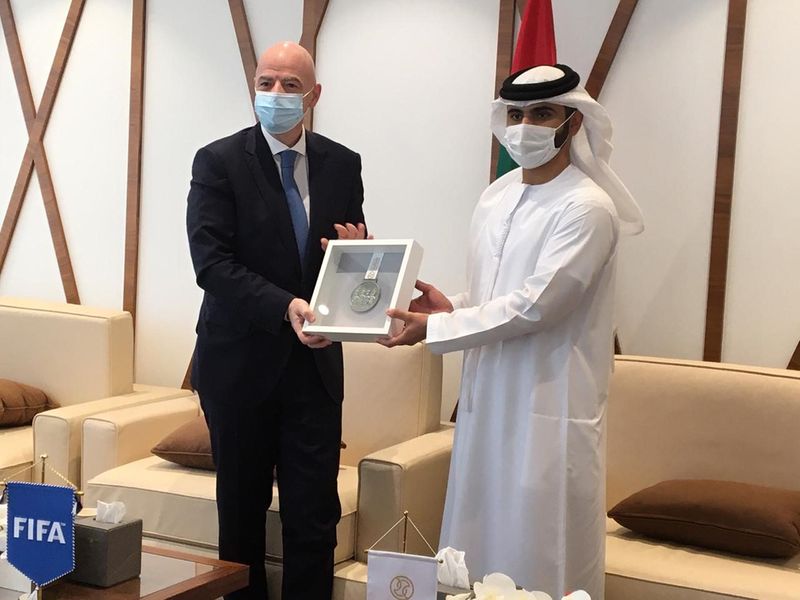 The meeting also saw a discussion on ways of strengthening the relationship between the DSC and Fifa, while also finding ways to bolster their efforts to develop international football and broaden the role of football in promoting values of tolerance, peace and coexistence among people.

Infantino was then escorted to a tour of the council’s office while being shown ‘The Wall’, which is a collage of some of Dubai International Sports Conference’s best-known guests and participants through the years. The Fifa chief also visited the Mohammad Bin Rashid Creative Sports Award, and expressed his admiration for the award’s logo.

Sheikh Mansoor also officially invited the Fifa President to speak at this year’s Dubai International Sports Conference that is fixed to be held under the theme ‘Football at the Summit’ at Armani Hotel in Burj Khalifa, on December 27.

Infantino thanked Sheikh Mansoor and accepted the invitation to deliver the keynote address at the conference later this month. The keynote address will focus on the role football plays in bringing people together and promoting human values, while dwelling on FIFA’s upcoming efforts and initiatives to develop football globally.

The Dubai International Sports Conference has been bringing football’s top stakeholders together since 2006 for extensive discussions on challenges facing the ever-evolving world of football and discussing ways to develop and enrich the sport at the domestic, regional and international level.

Infantino has been a regular guest at the annual event and has featured in at least six editions since his first appearance in 2011, which he came as the General Secretary of the Uefa. Subsequently, Infantino was elected as President during the Fifa Extraordinary Congress held at the end of February 2016. He was re-elected for a second term in June 2019.

Since the change of guard at the world governing body for football, Infantino has overseen the expansion of the Uefa Euro Cup to 24 teams, while playing a crucial role in the conception of the Uefa Nations League and Uefa Euro 2020 that will be played in 13 European nations next year.