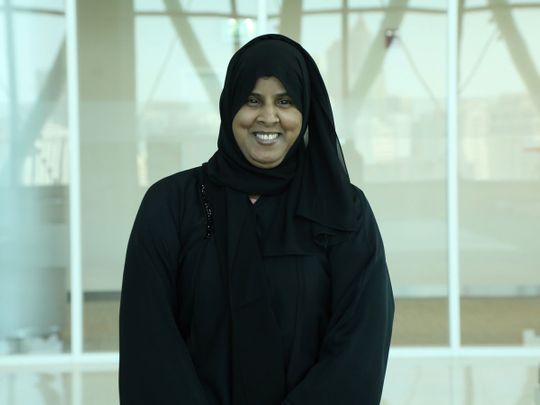 Salha Al Dhaheri was the first patient to receive ‘awake’ neurosurgery, and during the procedure at Cleveland Clinic Abu Dhabi (CCAD), she named objects, read sentences, and counted backwards from 100. This enabled surgeons to ensure that they were resecting (cutting out) the tumour, located to critical areas in the brain, without damaging vital pathways.

“It was a very surreal experience to see the doctors operate while also being awake and answering questions. But there was no pain,” Al Dhaheri, a school bus supervisor in Abu Dhabi, said. “Now my issues of dizziness and seizures have stopped, and I can’t thank the doctors enough for this miracle. I am still undergoing rehabilitation, but my quality of life has improved drastically. I am looking forward to resuming my duties as a supervisor,” she added.

Al Dhaheri’s debilitating seizures are a typical symptom of a tumour within the brain parenchyma (functional tissue), which were causing difficulties in speaking and sudden paralysis of her right arm. These issues indicated that her slow-growing, tumour was located very close to the language and motor cortex of the brain.

Awake neurosurgery is a preferred technique to remove tumours in functionally important regions of the brain, as it enables doctors to continually monitor the patient’s function and minimises the risks of the operation. Doctors select candidates for awake neurosurgery based on the severity of the symptoms and ensure their comfort with the idea of waking up during surgery after several discussions with them and their family.

“Al Dhaheri’s tumour was in one the most eloquent areas of her brain. The same tumour removal on the right side would have been done in a sleeping state because there would be no risk of language loss, and therefore you do not need the patient to be awake,” explained Dr. Florian Roser, chair of the Neurological Institute at the hospital

“But you can only test language and higher cognitive functions when your patient is awake. When I saw Salha, I knew she would be an ideal candidate for awake surgery,” Dr Roser added.

During the part of the surgery when the doctors were approaching the brain, Al Dhaheri was unconscious, but then fully awake for three to four hours while the neurosurgeon was mapping her brain and removing the tumour. Patients can stay awake during this part of the surgery without feeling pain as the brain tissue doesn’t feel any pain. The team was talking to her the entire time and instructing her to do certain motor movements while they located and removed the tumour.

Dr. Eugene Achi, the neurophysiologist who was part of Al Dhaheri’s care team, said that they were also able to take out the epileptic zone that was triggering the seizures while she was awake. “We lay a sheet of electrodes directly on the brain to pick up epileptic activity. We identified the epileptogenic zone because the patient started having sensations, but we were very careful to avoid triggering a seizure as her safety was of utmost importance,” Dr Achi said.

The hospital has also performed three other such awake neurosurgeries since Al Dhaheri’s, and are scheduled to complete another two in the coming months.