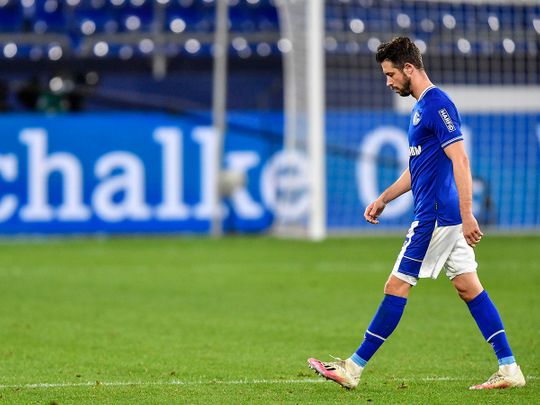 Berlin: Schalke have been staring down a dark tunnel for months with no light in sight but this week things could get even worse for the Royal Blues.

With in-form Borussia Moenchengladbach waiting for them on Saturday, Schalke desperately need to get their act together if they are to have any chance of slowing down their free fall.

Club bosses on Tuesday suspended Amine Harit and Nabil Bentaleb over disciplinary issues while the contract of veteran Vedad Ibisevic will be dissolved at the end of December, the decision coming following a spat with an assistant coach on the training ground this week.

The club said Ibisevic’s row had nothing to do with the decision but it is indicative of the prevailing atmosphere among players.

They are frustrated by a disastrous run in the Bundesliga in 2020 that has seen them go 24 consecutive league games without a win.

“I could sit in the changing room and cry,” said Schalke’s Mark Uth after last week’s 2-0 loss to Wolfsburg. “We are steps too late, never go into one-on-ones, don’t even get booked. I don’t know how we can win a football game like that.”

Their bad run forced Schalke this week to part ways with squad planning director Michael Reschke but pressure is almost at explosion point for sports director Jochen Schneider as well. “These decisions we took were necessary for the team and the club,” Schneider said on Wednesday. “It is not about individual fates but about managing to pull ourselves out of the current situation.”

Injuries to striker Goncalo Paciencia, keeper Ralf Faehrmann and defender Salif Sane, who could all be out for months, have added to their mounting problems.

Schalke’s last win was a 2-0 over Gladbach back in January and they are now edging closer to the all-time winless run of 31 league matches set by Tasmania Berlin.

Nothing seems to work for the Ruhr valley club including the departure of coach David Wagner earlier this season. His successor Manuel Baum has enjoyed a similar disappointing run seeing his team throw in the towel week in week out.

“We need that one win that will release us,” Schneider said. “It is about the here and now, to keep the team in the Bundesliga. That is the only thing that matters.”