“My ankles are quite sore,” says British artist and philanthropist Sacha Jafri who recently unveiled his Guinness World Record-holding painting, ‘The Journey of Humanity’, in Dubai. It’s a type of pain that Jafri is quite familiar with. “I paint for 18-20 hours at a time. I stop when I collapse, I run out of energy, I’m exhausted. And the next day I look at what I’ve done and either it’s beautiful or it’s oh dear…And I don’t really know what I’ve done until the next day so sometimes it works, sometimes it doesn’t,” he explains.

This time, the gamble paid off. Jafri, who usually divides his time between studios in London, New York, Singapore and Dubai was stilled in place because of COVID last year, when he noticed a change in world weather. “It was really the start of COVID that I felt that humanity had become very disconnected from the soul of the earth. And then our world had become full of static. And then COVID-19 hit us. And it didn’t just hit a country or a continent – it hit the world. The static left our world, it was extraordinary. And there was a beautiful silence. 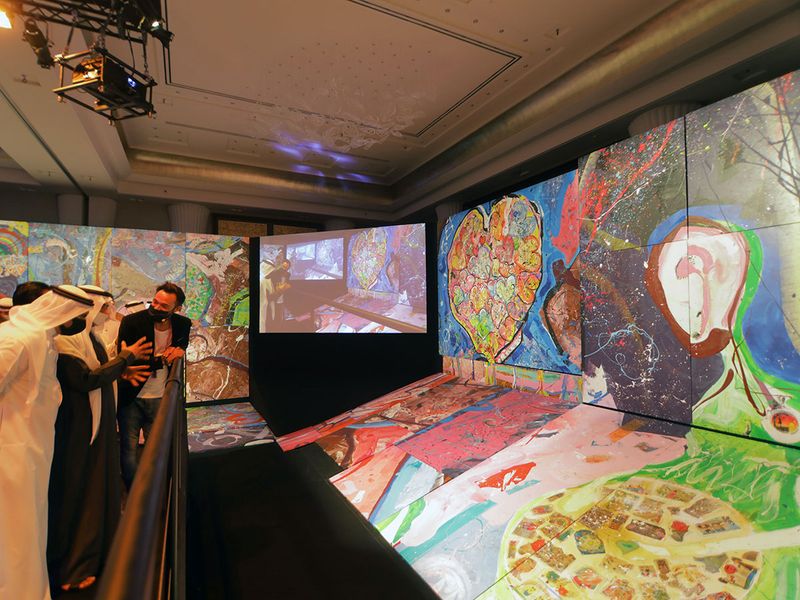 “And it was a silence that needed to be heard. So I wanted to create a painting that would inspire and evoke societal change and maybe a higher consciousness, so we can understand the importance of empathy and love to heal our planet and use this small window of opportunity to make a change that could potentially last forever. If we can’t change now, we never will,” he says.

From this thought was born the 17,000 square-foot experiment that turned out to be the largest canvas in the world. Set up in the ballroom of Atlantis, The Palm, ‘The ‘Journey of Humanity’ incorporates messages of hope, of life from children from all over the world. “They are all very inspiring. I guess the one that stood out was from a four-year-old from a slum of India. These kids are living 10 to a hut, 4 metres by 4 meters, and they have nothing. They use the same water to cook, to go to the loo, to drink, and it’s the same water that the cows are releasing their stuff into. And that’s how they live. But this child sent a picture and it was a little girl hugging the world. It really touched me. Because I knew that child had nothing, but she had so much love. And a lot of hope, which was inspiring.” 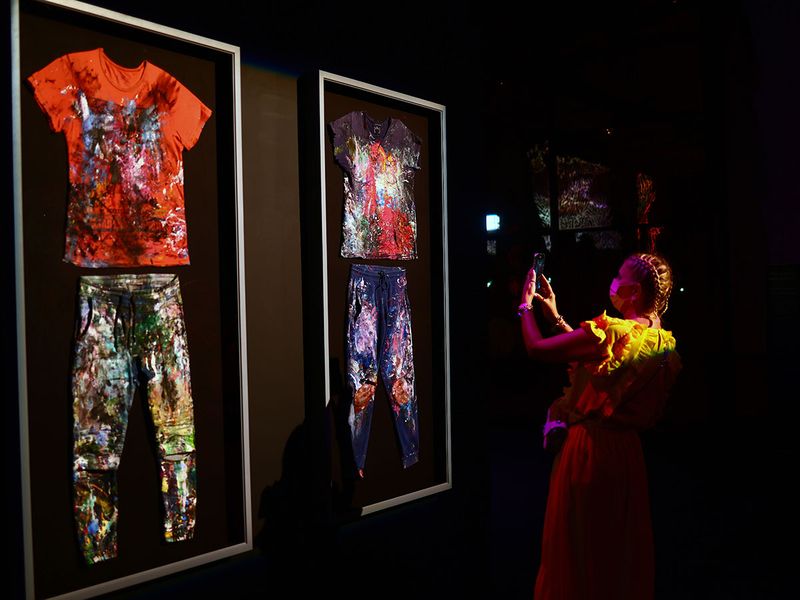 He used 1,065 paint brushes and a whopping 6,300 litres of paint in the past year for his project.
Image Credit: Clint Egbert/Gulf News

He says it was these rays of sunshine that would rouse him from his stupor on days when exhausted he’d think of slowing down. They would spark in him the need to continue, to create. This drive to fashion an almost living construct is a part of who he is. He says: “for me, I’m in a very deep trance when I paint from the subconscious. And I tap into something deep in the subconscious and then I just act as a vessel. I let the paint sort of drip through my soul, through the arm, through the hand, through the brush and onto the canvas. And I’m not really aware of what’s happening. And I paint for 18-20 hours at a time.”

It’s something that he can trace back to when he was 15. “ I had to stare at a blank canvas for 4-5 hours and then I’d fall into a very, very, very deep meditative state, but after 25 years of painting, I can now get into that state in 3.5-4 minutes. There’s a song I play and before the end of the song I’m in a trance.” [The song is ‘Growing Up’ from the movie ‘The Good Lie’, in case you’d like to try it too.] 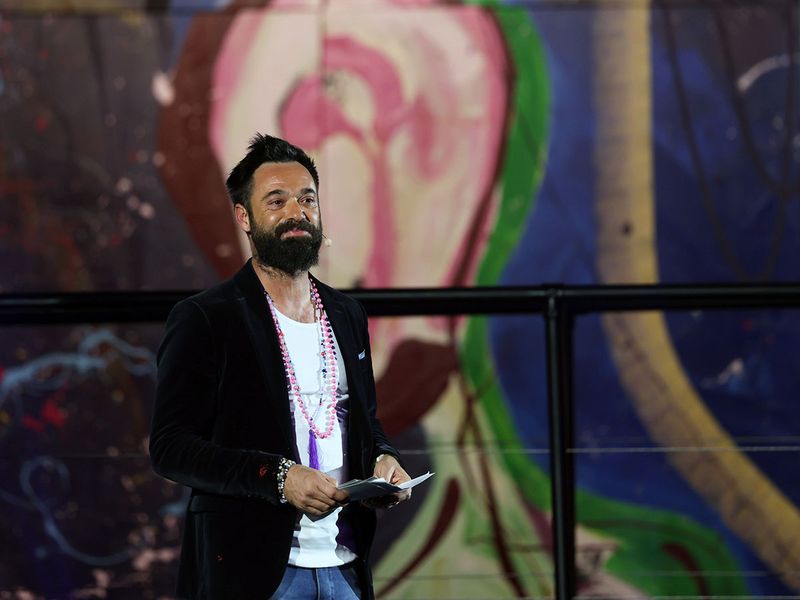 ‘The Journey of Humanity, scales over 17,000 square feet and was painted by Sacha Jafri (pictured). .
Image Credit: Clint Egbert/Gulf News

When he gets into this meditative mode, Jafri’s brain experiences theta waves; it’s been studied by scientists. “That’s what is generated when your subconscious is hard at work,” he was quoted as saying by ‘Luxury London’.

He believes this focus, this ability to go into this hypnotic state is because he tries to live a life of grace, one that lifts humanity, that helps it. His latest project fits neatly into that mould. ‘The Journey of Humanity’ aims to raise $30 million for charity and is part of the initiative ‘Humanity Inspired’, which was launched under the patronage of His Excellency Sheikh Nahayan Mabarak Al Nahayan, Cabinet Member, Minister of Tolerance and Coexistence in partnership with Dubai Cares, part of the Mohammed bin Rashid Al Maktoum Global Initiatives and Atlantis, The Palm. 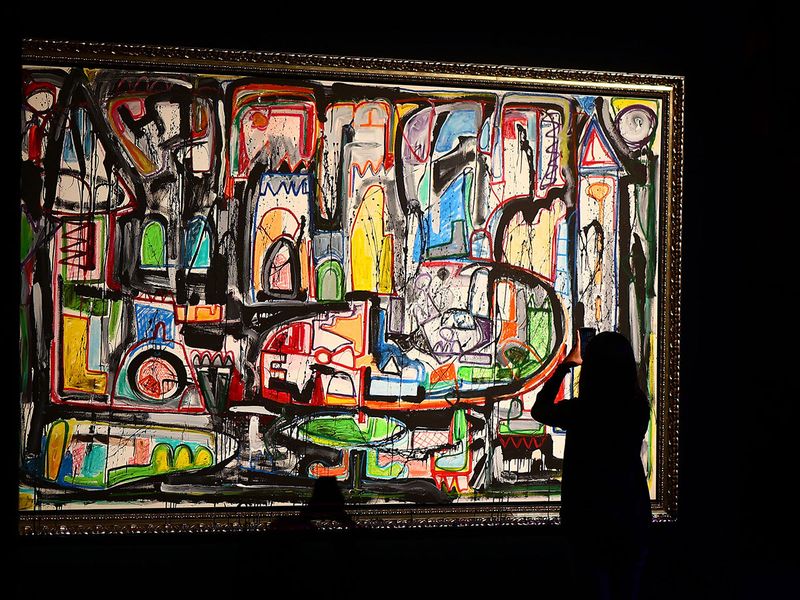 He says: “Artists focus too much on the finished product and art is all about the marketing and all that side of it. There’s a lot of smoke and mirrors in the art world to give hype and value.”

“I want to get rid of those smoke and mirrors and make art a bit more honest, a bit more about purity and magic and less about all the nonsense around it,” he adds.

And so he’s willing to put in the work – even if it means 20 hours of non-stop painting, without food or water, even if it means broken ankles and a hurt spine. Because he is a man on a mission: For now, it’s to paint the silence.