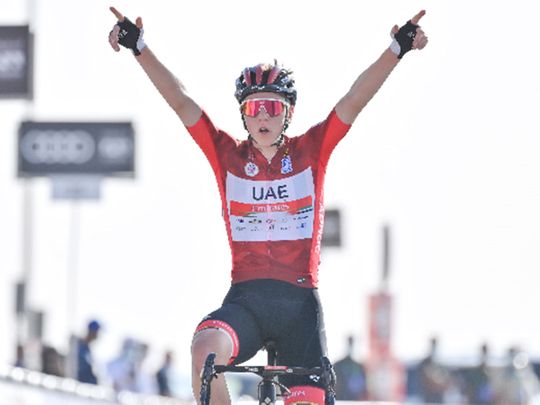 Tour de France winner Tadej Pogacar and his team have more reasons to celebrate this week. Not only did the young Slovenian walk away a champion during the UAE Tour, but the 22-year-old cyclist also committed himself to the Emirati team for another five years.

Pogacar will now be with the squad until at least 2026, describing his team as “home”.

“I feel at home in this team; there is a special atmosphere between the management, riders and staff and it’s a good environment to be in,” said Pogacar.

“The team shows a lot of trust and confidence in me which I am thankful for, and I work hard to show that when I’m racing alongside my teammates. I hope we can have many more successful seasons together in the years ahead,” he added.

Pogacar called the recent UAE Tour win “one of our biggest achievements”.

“This is really big. It was my first goal of the season and my first home race, so it was really important and I’m super happy. My team and teammates did a really good job and we took the win. This is one of our best achievements. I’ll come back to the UAE for sure,” he said.

Pogacar has had a bright journey and rose to prominence in the past two years. As the winner of 2019 Tour of California, he became the youngest cyclist (20) to win a UCI World Tour.

Pogacar also won the 2020 Tour de France, which was his first time participating in the race.

President of the UAE Team Emirates Matar Al Yabhouni called the player the team’s “present and our future”.

“He is a rider who was able to win the Tour de France despite his young age and still managed to handle the pressure of such a great success. He showed great poise and determination to win the UAE Tour, a race that is growing year after year and is of obvious importance to us. I am sure that we will continue to achieve important successes together going forward,” he said.

“He strongly believes in our project as we do in his abilities. It is already the third time we’ve extended his contract which shows his commitment to the project we are building here at UAE Team Emirates. We are creating a real group, united, with an atmosphere that I don’t remember in all my years in cycling. I am particularly proud of this,” said Gianetti.