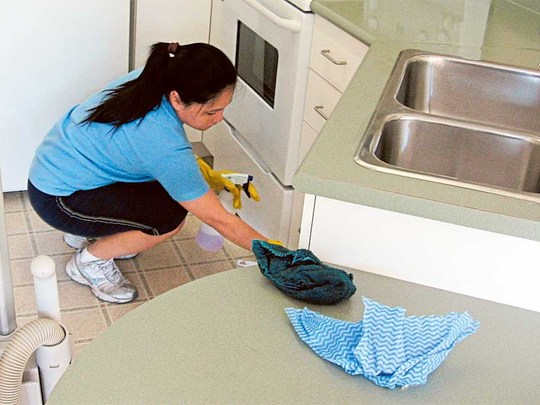 Dubai: Domestic workers, employers and advocates of migrant workers’ rights have hailed the recent agreement by the UAE and Philippines on household service workers (HSWs) and called it a landmark pact in ensuring workers’ welfare.

The UAE Ministry of Human Resources and Emiratisation (MOHRE) and Philippine Department of Labour and Employment (DOLE) announced on Tuesday the official deployment of domestic workers from the Philippines to the UAE — which stopped in 2014 — will resume next month.

Lyne Catedrilla, a Filipino nanny who has been working in Dubai for 15 years, said the UAE-Philippines Memorandum of Understanding on Labour Cooperation with Annex Protocol on Domestic Workers would provide protection to her kababayans (compatriots) working in the UAE. She told Gulf News: “I’m grateful I have never experienced any maltreatment from my previous and current employers but I have personally seen and rescued distressed kababayans who were grievously maltreated. There was one incident when I had to use my own money to help save a Filipina maid who was abandoned by a private recruitment agency. She was maltreated, no one helped her; so, my madam and I went to fetch her and bring her to the Philippine consulate. I have also encountered other Filipinas who fell prey to illegal recruiters.”

Another Filipino nanny Nancy Perez, who has been working for 33 years in Abu Dhabi, said the recent agreements augurs well for those who will work as a domestic worker in the UAE for the first time. She said: “There will be proper recruitment process for domestic workers — from the issuance of visas up to providing orientation and training for household work.”

Perez was one of the lucky ones who have had kind and generous employers. But there were others who were recruited illegally from their home country. One group of domestic workers said they reported instances where a domestic worker was poured with boiling water by her employer; some were deprived of food or locked up. There was also a maid who jumped from a small window of a flat in a medium-rise building. “Most of the victims were trafficked and they came to the UAE illegally,” noted Perez.

According to the Philippine government, the issue of illegal recruitment was the crux of the suspension of HSWs back in 2014. Then Philippine Labour minister Rosalinda Baldoz announced the suspension of deployment of verified domestic workers to the UAE following the introduction of a unified contract by the UAE Ministry of Interior that led to the suspension of various embassies’ role in verifying and attesting contracts. Baldoz said: “Without the necessary verification, HSWs bound for the UAE, might fall prey to human traffickers. I am concerned that without the requisite verification, HSWs who will travel to UAE will be vulnerable to human trafficking, which we must avoid at all cost.”

After the deployment ban, UAE and Philippine labour officials conducted a series of bilateral talks to resolve the conflicting recruitment rules.

On Tuesday, DOLE Undersecretary Claro Arellano, head of the Philippine delegation, said the sending of Filipino workers will resume in April following a two-day Joint Committee Meeting in Manila. He noted an agreement has been reached that will be covered by a Unified Employment Contract (UEC) that will “stringent measures to protect Filipino domestic workers.”

Current DOLE minister Silvestre Bello III dubbed the agreement as a milestone in both the UAE and Philippine governments’ efforts to further protect Filipino migrant workers. The Philippine government also reiterated its position to deploy the workers through legal channels.

Speaking to Gulf News, Barney Almazar, director at the corporate-commercial department of Gulf Law and an expert on Filipino migration, said: “The recent announcement on the new rules for Filipino domestic workers is a testament to the commitment of both Philippine and UAE governments to protect the human rights of our Filipino domestic workers. The timing is also good as Filipino domestic workers can now return to UAE and earn much needed money for their families back home during this pandemic. The new laws offer better protection than previously offered,” he added.

Almazar noted domestic workers are some of the most vulnerable sectors of society. “Giving them more rights in law shows that we are a society that values human dignity. Our domestic workers do not simply iron our clothes, prepare food in our table or clean our house, they don’t just make our lives easier, they enable us to enrich our lives,” he underlined.

“It has been suggested to have a dedicated helpline or online portal to contact MOHRE and its Philippine counterpart to make sure the contractual terms are observed. “Both the Philippine and UAE governments must audit on a regular basis the status of the domestic workers and ensure the employers are following the rules,” Almazar added.

Michelle Quinto-Guinto, founder of CMG Cargo Gawad Kasambahay (award for domestic workers), who also employs a nanny for her family, said: “Domestic helpers sacrifice a lot — leaving their own family to take care of other families. It is but right and just to protect them.”

Guinto noted the provisions stipulated in the UAE-Philippines agreement are recognition of basic human rights. “The right of the domestic worker to take at least eight hours of sleep every night; to have a day-off; the right to keep his/her passport or documents; to get paid on time and have a bank account for payment of salary; to have and use cellular phones and other communication devices are inviolable and inherent rights of workers,” she underlined.