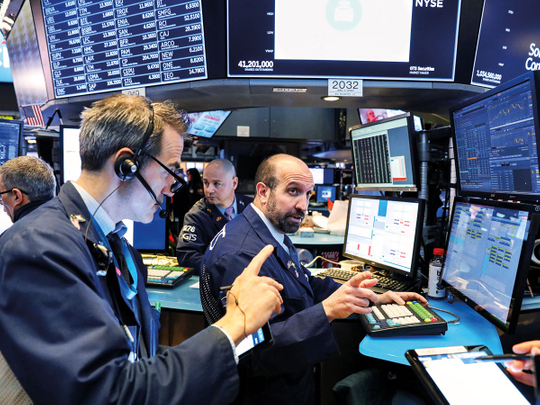 Dubai: As the week kicks off with manufacturing data from several key economies, which will give an insight into the global economy, economists foresee some slowdown from recent economic strength.

IHS Markit also noted that the PMIs will be the first major surveys to provide clues as to how business conditions have changed in the aftermath of the US elections and at a time when the adverse impact of new lockdowns in many countries will have been countered by encouraging news on COVID-19 vaccines.

US markets shut for Thanksgiving

US markets are closed on Thursday for Thanksgiving, a day after markets will closely analyse a stream of US data that are expected to come in. Stocks, meanwhile, will continue to focus on both the growing virus outbreak and the potential for a rebound next year, once vaccines are distributed.

Markets are also watching for any potential news on a fiscal stimulus package from the US, although it currently looks unlikely that any progress on the trillion-dollar package will be made before president-elect Joe Biden takes office on January 20.

The coming holiday-shortened could continue to be a period of consolidation for the stock market, analysts view, as restrictions impact the economy during the important Thanksgiving holiday period. Important economic data in the week ahead includes durable goods and personal income and spending.

IHS Markit viewed the US PMI data to provide the first post-election snapshot of the world’s largest economy. “October data showed business activity growth accelerating to the strongest since May 2018, driven by the largest increase in service sector activity since April 2015 and a marked improvement in business confidence about the year ahead,” IHS Markit added.

“Global markets remain torn between the negative impact of surging coronavirus cases around the world and the prospect for vaccines being rolled out in the New Year,” explained Ole S. Hansen, head of commodity strategy at Saxo Bank. “Since the vaccine announcement from Pfizer/BioNTech and Moderna this past week, the markets have tried to focus on a recovery theme, Hansen added.

“This outlook, however, is still being hampered by uncertainties with regards to the timing of when vaccines will have a meaningful impact on the global community. Not least considering the continued surge in coronavirus cases across the world leading to renewed lockdowns and reduced mobility.”

More data from UK, US, Eurozone

Analysts at IHS Markit view that the Eurozone data will be especially eagerly awaited after October’s PMI showed the region’s economy stalling as its third quarter rebound faded. “There were marked variations in performance, however, with Germany bucking the slowdown by reporting strong manufacturing-led growth.

“In the UK, growth weakened markedly in October, and the further lockdown in November is expected to have hit the economy hard, threatening a double-dip downturn. The data will also reveal the extent of stockpiling by companies ahead of the end of the Brexit transition period.”

Last month’s IHS Markit survey showed that firms were slightly behind on stock building compared to the same time ahead of ‘Brexit deadlines’ in March and October 2019.

UAE bourses off to a positive start this week

Both the bourses in the UAE gained on Sunday, as investors continued to pocket weekly gains with markets worldwide witnessing an improving pandemic-stricken backdrop.

The Dubai Financial Market (DFM) ended up 0.4 per cent, while the Abu Dhabi Securities Exchange (ADX) too recorded a similar-sized gain. While the DFM ended last week up about 2 per cent, the ADX rose about 1 per cent.

Similar gains were recorded in indices elsewhere in the GCC, with benchmarks in Kuwait, Qatar and Bahrain, all edging up, while the region’s largest bourse – Saudi Arabia’s Tadawul – traded largely flat.