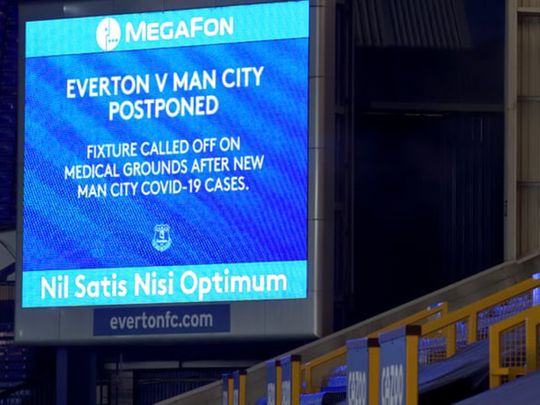 Dubai: Manchester City had to dramatically call off their Premier League clash against Everton on Monday night after a spate of coronavirus cases at the Etihad. While the decision is controversial, it may just play into City’s hands.

The deadly illness is as serious as things can get — and the cancellation of the match at Goodison was the only logical answer to prevent further spread of the virus. However, City will now have a recuperation period while all their Premier League rivals are getting less than 48-hours of respite between games.

The visit to Everton was called off after multiple new positive tests for COVID-19 were detected among Pep Guardiola’s squad.

City already have a game in hand to make up against their title challengers, and two matches — with a potential six points — to be picked up in the New Year will suit a team of their depth right down to the ground, while squads at Liverpool, Tottenham and Chelsea struggle to gather themselves for clash after clash.

City had already announced on Christmas Day there had been four positive tests at the club for players Kyle Walker and Gabriel Jesus and two staff members.

“Based on strong medical advice the Premier League, in consultation with both clubs, have decided to postpone the fixture,” City said in a statement.

“After the latest round of COVID-19 testing, the club returned a number of positive cases, in addition to the four already reported on Christmas Day.

“With the security of the bubble compromised, there posed a risk that the virus could spread further among the squad, the staff and potentially beyond.”

According to Premier League rules matches will not be postponed unless the affected club has fewer than 14 fit senior players. However, the league said the match had been postponed as a precaution on medical advice.

“The Board agreed to rearrange the game as a precaution, and further testing will now take place tomorrow. The decision has been taken with the health of players and staff the priority.”

The clash at Goodison Park was the only Premier League match in the current round of fixtures due to have fans in attendance.

The city of Liverpool is in Tier 2 for coronavirus restrictions meaning up to 2,000 supporters can attend Liverpool and Everton home matches.

Everton could have gone joint top of the table, alongside Liverpool, with victory.

“Whilst Everton will always have public safety uppermost, we will be requesting full disclosure of all the information that Manchester City provided to the Premier League so the club can be clear on why this decision was taken,” Everton said in a statement.

City’s training ground will now close for an “indeterminate period” with further testing on players and staff to take place before it can reopen.

They are due to face Chelsea away in the Premier League on Sunday and Manchester United in the League Cup semi-finals on January 6.