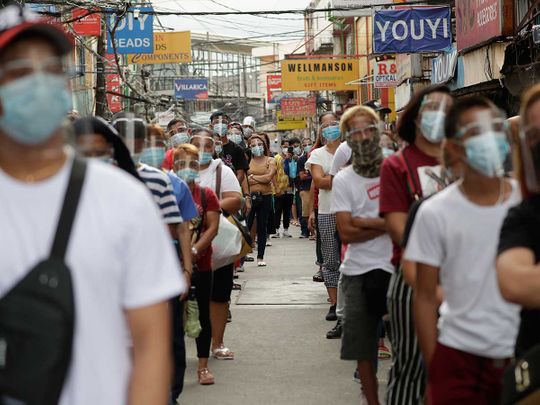 Dubai: The Philippines is today facing an unprecedented public health challenge. It has Southeast Asia’s second-biggest COVID-19 outbreak at more than 563,000 infections and over 12,000 deaths, according to Johns Hopkins February 23, 2021 data. The country aims to start immunisations this month. Initially, the country is set to receive 117,000 doses of the Pfizer-BioNTech vaccine, and 5.5 million to 9.3 million doses of the AstraZeneca brand by March.

“The COVID-19 vaccination programme will be the largest and most complex public health effort in the history of the Philippines. It will especially benefit the poor and most vulnerable among us,” said Dr. Nicanor Pier Austriaco, OP, a molecular biologist and a government vaccine consultant, whose lab is also developing a yeast-based vaccine in the US. 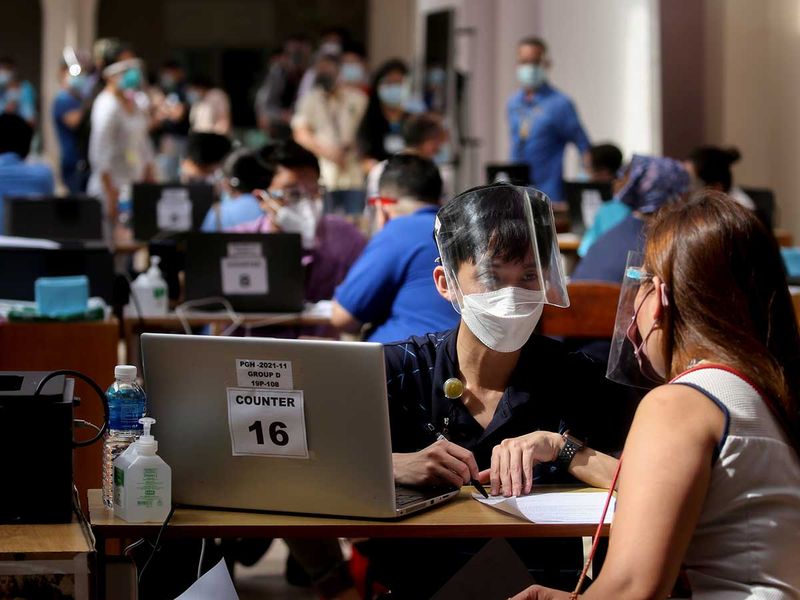 Q: Why is the Philippines’ COVID-19 vaccination drive complicated?

Q: What’s the level of vaccine hesitancy rate in the Philippines?

Nearly 50%. That means 5 out of 10 Filipinos are not sure if they will be vaccinated against COVID-19.

Q: How many health workers does the country have?

There are an estimated 1.4 million health workers in the Philippines.

How many Filipino nurses work overseas
• Exact numbers are hard to come by. But many of those nurses had been naturalised, or had become permanent residents in countries they work in, especially in the West.

• Thousands of medical practitioners leave the Philippines to work overseas every year, with an estimated 16,000 nurses going in 2019 alone, according to Eleanor Nolasco, vice-president of Manila-based Filipino Nurses United advocacy group.

Q: What is the percentage of the population being targeted for COVID-19 vaccination.

At least 60% to 70%, according to Philippine Health Secretary Francisco Duque III.

Q: Is vaccination mandatory in the Philippines?

No. Vaccination is not mandatory. But the government “highly encourages” the public to get vaccinated and be protected against preventable disease. President Rodrigo Duterte wants the nationwide vaccination campaign to start at the soonest possible time so the government can relax quarantine restrictions.

Q: What are the vaccines approved by the Philippines’ drug regulator (Food and Drug Administration)?

There are three, so far: 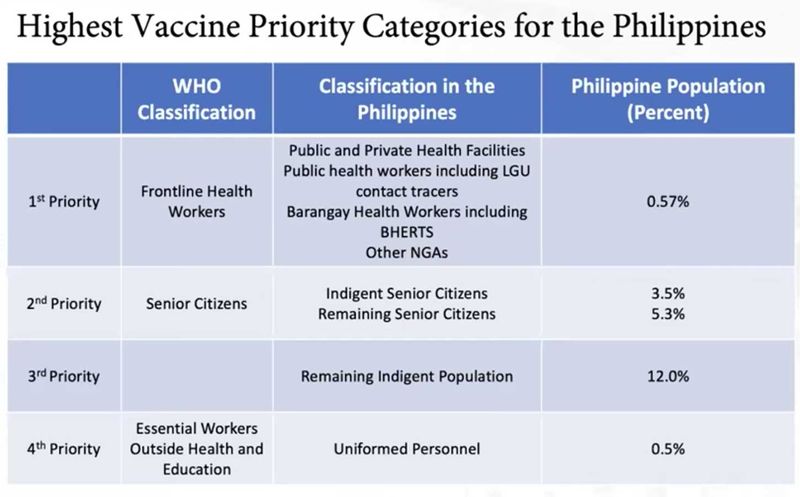 Q: Who are the vaccine makers that the Philippine government is talking negotiating with?

Secretary Carlito Galvez, vaccine czar and National Task Force Against COVID-19 chief, revealed that they have ongoing negotiations with pharmaceutical companies including (but not limited to): 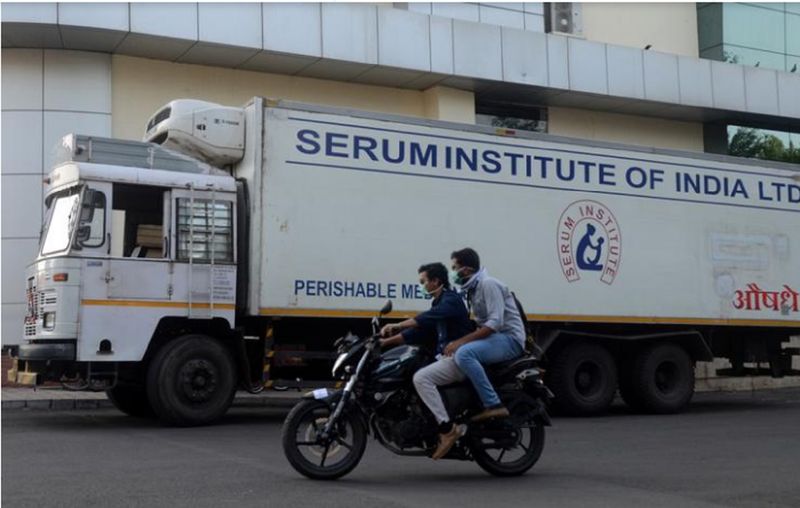 Men ride on a motorbike past a supply truck of India’s Serum Institute, the world’s largest maker of vaccines, which is working on a vaccine against the coronavirus disease (COVID-19) in Pune, India, May 18, 2020. Picture taken May 18, 2020.
Image Credit: Reuters

Q: How many vaccine doses are expected to arrive and when?

Before end-March 2021, at least 5.6 million doses of two COVID-19 vaccines are expected in the country, the chief of the coronavirus task force told the official Philippine News Agency (PNA) on February 2, 2021.

Q: How many vaccine doses does the country expect to have?

Q: Will the Philippines hit its vaccine goal?

The Philippines is expecting up to 146 to 148 million doses via its direct supply negotiations with manufacturers. In addition, it expects to get 40 million from the COVAX facility [a WHO bulk-buyer initiative for developing countries].

Here’s the breakdown of what’s been announced so far: 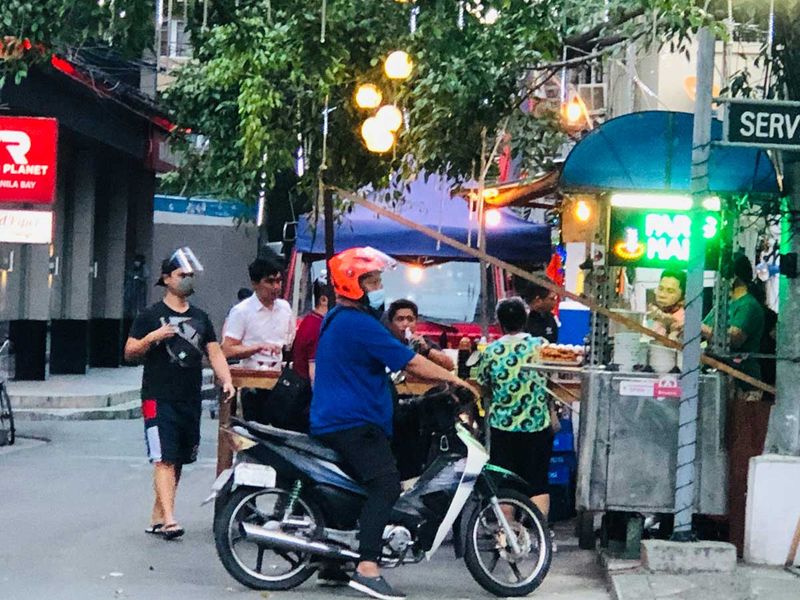 Q: How many vaccine doses did the Philippines secure so far?

number of vaccine doses secured by the Philippines so far, according to a senior official.

WHAT IS A “TERM SHEET”
Term sheets — are non-binding agreements outlining terms and conditions of a potential agreement. Galvez said the government has already signed term sheets — with five pharmaceutical firms. This could secure up to 108 million doses of Covid-19 vaccines for the country.

Q: Have these supply agreements been finalised?

Q: Why were some of the vaccines ordered before approval by FDA?

It’s not clear. Secretary Galves said the doses from AstraZeneca and Novavax (yet to be approved by the Philippines’ FDA) are expected to land between April to June. “We are negotiating to have the rollout by the second quarter (of 2021), especially for Novavax and AstraZeneca,” Galvez said during a Cabinet meeting.

Q: When will the bulk of vaccine supplies come?

number of vaccines need to cover 70% of the Philippine population of 70% at the current standard double-dose protocol, administered 3 to 4 weeks apart.

Q: How many vaccine doses does the country need?

The total population is estimated at 108 million, spread over 7,640 islands. The main island groups are Luzon, Visayas and Mindanao. If a minimum of 70% of the population will be targeted for vaccinations using a double-dose protocol, it would mean the country needs 151.2 million doses. 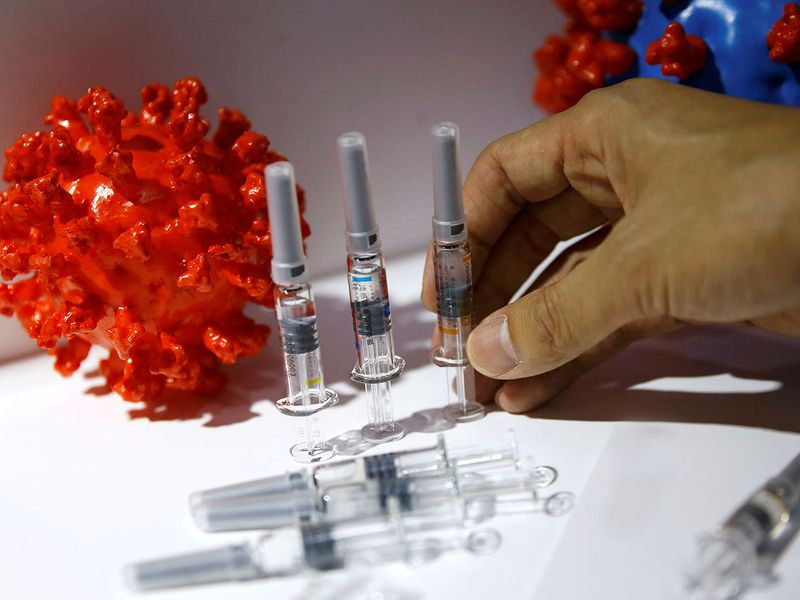 If a minimum of 70% of the Philippines’ 108 million inhabitants will be targeted for vaccinations using a double-dose protocol, it would mean the country needs 151 .2 million doses.
Image Credit: AP

Q: What preparations are being made by national and local government?

Visiting the Cold Chain Management and Logistics Warehouse of UNILAB with Sec. Charlie today to make sure PH is ready for the COVID-19 vaccine rollout. pic.twitter.com/S9Ic9Lg2dV

Q: Where will the vaccinations start?

Manila and major cities. Region 3 and the National Capital Region (to where Manila belongs) account for 60% of the COVID cases in the country.

Q: Will the Sinovac shots be used for frontline health workers?

On February 22, 2021, the Philippines has approved SinoVac Biotech’s COVID-19 vaccine for emergency use. The country Food and Drugs Agency (FDA) said on Monday, however, that will not give Sinovac to healthcare workers at risk of exposure due to its varying levels of efficacy.

Vaccines do not provide a cure for an infectious disease. Rather, they stimulate or instruct our body’s cell machinery to help trigger a natural immune response. With SARS-CoV-2, this response is achieved primarily through T-cells, B-cells and neutralising of the antibody production, which aim to prevent infection (and its associated disease, COVID-19).

If a vaccinated person later comes into contact with SARS-CoV-2, the immune system will recognise its known viral structure, combat the virus and eliminate it. Neutraliaing antibodies targeted at SARS-CoV-2 are circulating in your body all the time and will immediately bind to the virus, “neutralise” it and prevent it from entering the cell, thus protecting you from getting sick. T-cells help the immune system to fight intracellular infections and can also kill the infected cells directly.

Q: When will the Philippines achieve herd immunity from COVID-19?

It’s hard to say. Some experts now say that a 70% target may not be enough, as the ideal vaccination rate should cover up to 95% of the population for herd immunity to work.

Photos: A look back at the life of Mikhael Gorbachev, the last Soviet leader, on his 90th birthday